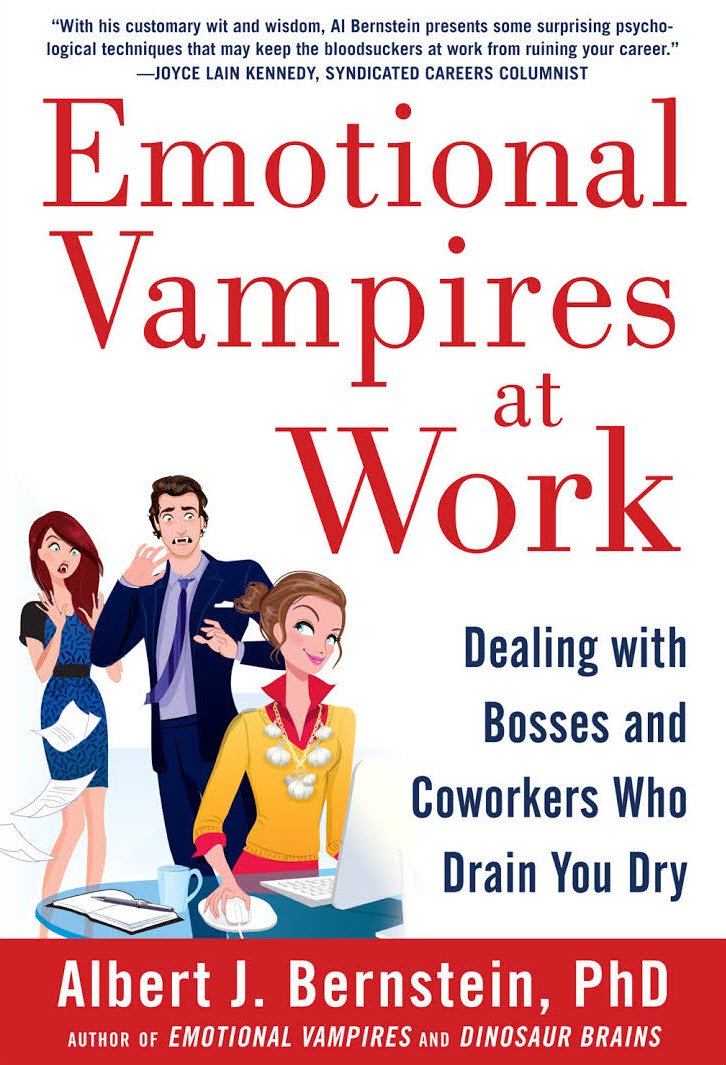 Whether it's a coworker, subordinate, or boss, there's at least one emotional vampire in every office. These people try your patience, sap your energy, and add an entirely unhealthy dynamic to workplace productivity. 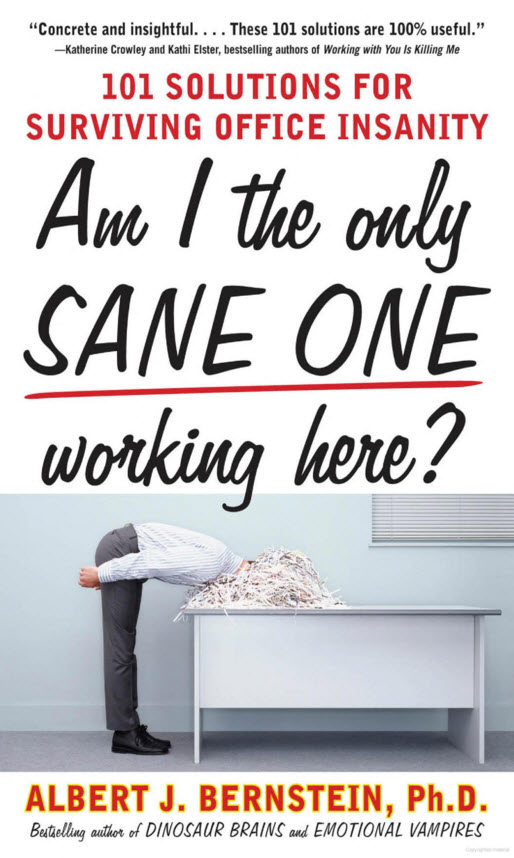 Am I The Only Sane One Working Here?

"...the most comprehensive guide I have ever read for solving any conceivable trying scenario!" —Julie Jansen, bestselling author of "You Want Me to Work with Who? and I Don't Know What I Want, but I Know It's Not This".

Article: 15 Signs Your Workplace is Dysfunctional

Review: by Dave McGinn, The Globe and Mail 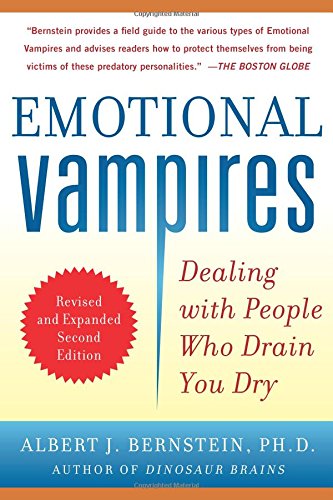 In the dozen years since the original Emotional Vampires was published, I have received many emails and reader reviews thanking me for writing a book that explains so many difficult relationships at home and at work. There have also been two consistent and contradictory requests – that I give more information about vampires at work, and that I give more information about vampires in readers’ personal lives.

In this revised and updated version of Emotional Vampires, I have added new chapters about the five vampire types as friends, lovers, spouses, children and parents. 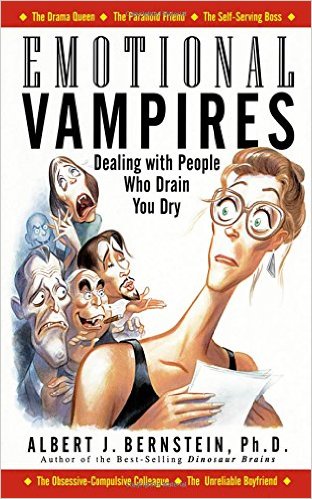 Best-selling author Albert J. Bernstein helped thousands of people deal with the dangerously stupid at work in Dinosaur Brains. In Emotional Vampires he goes even further to protect unsuspecting mortals from more devious and harmful creatures vampires ready to bite, suck, and kill the emotional and psychological wellbeing of their victims. Like the fabled demons, these vampires come in many shapes: -The living dead who think their "talents" place them above the laws of nature-Lords of darkness with huge egos and tiny consciences - Scary monsters who use their tempers in the same way terrorists use bombs-Blood-suckers who think others were created for their convenience Emotional Vampires tells readers how to spot a vampire in their lives, which defense strategies to employ to prevent one from striking, and what to do if and when they find themselves under attack. 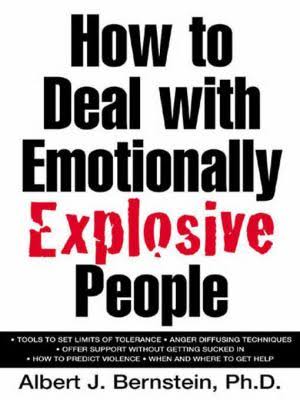 How to Deal with Emotionally Explosive People 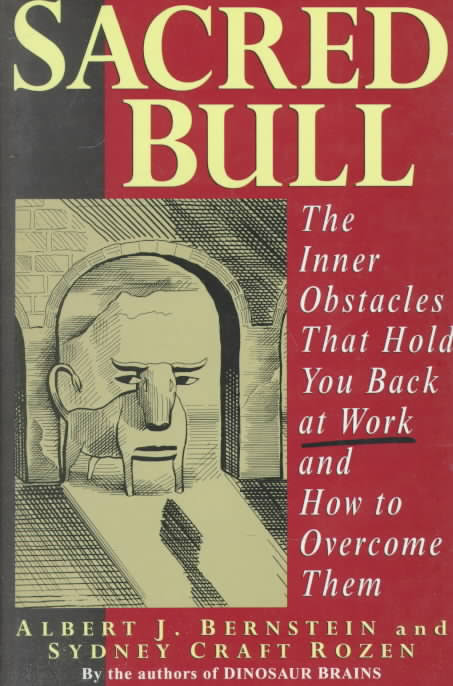 Going beyond the psychology of office politics to focus on people's internal barriers to positive personal change, this study is based on Dr Bernstein's years of experience both as practising psychotherapist and management consultant. It concentrates on the psychological traps and the inflexible, self-destructive belief systems that impair effectiveness and can often stop people from achieving their goals 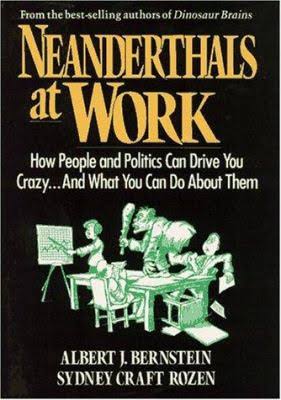 Do you spend half your time and energy dealing with politics and game playing? Are you forced to work in an uncivilized atmosphere, created and controlled by tiny brains, narrow minds, and brutish attitudes? Suffer in silence no more. Now, from the authors of the bestselling DINOSAUR BRAINS, here is a witty, informative, and devilishly perceptive look at the club-wielding, cave-dwelling boneheads who can make life in the office so miserable 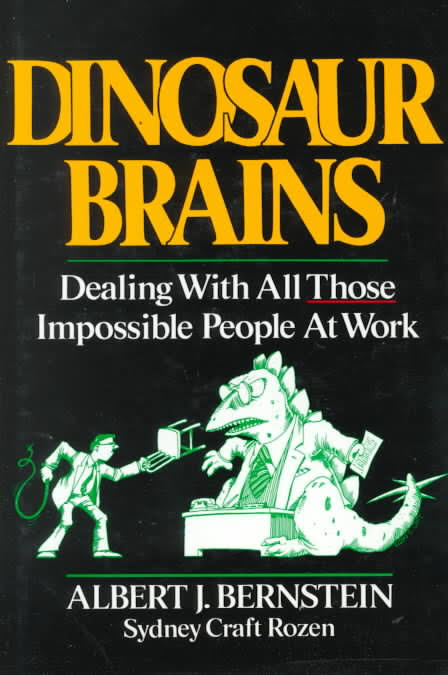 Discover how to cope with instinct, emotion, and irrationality--the dinosaur brain--that disrupts any business enivronment, with a step-by-step process that helps you reason your way through turf wars and power struggles, surly subordinates, temperamental bosses, and more...